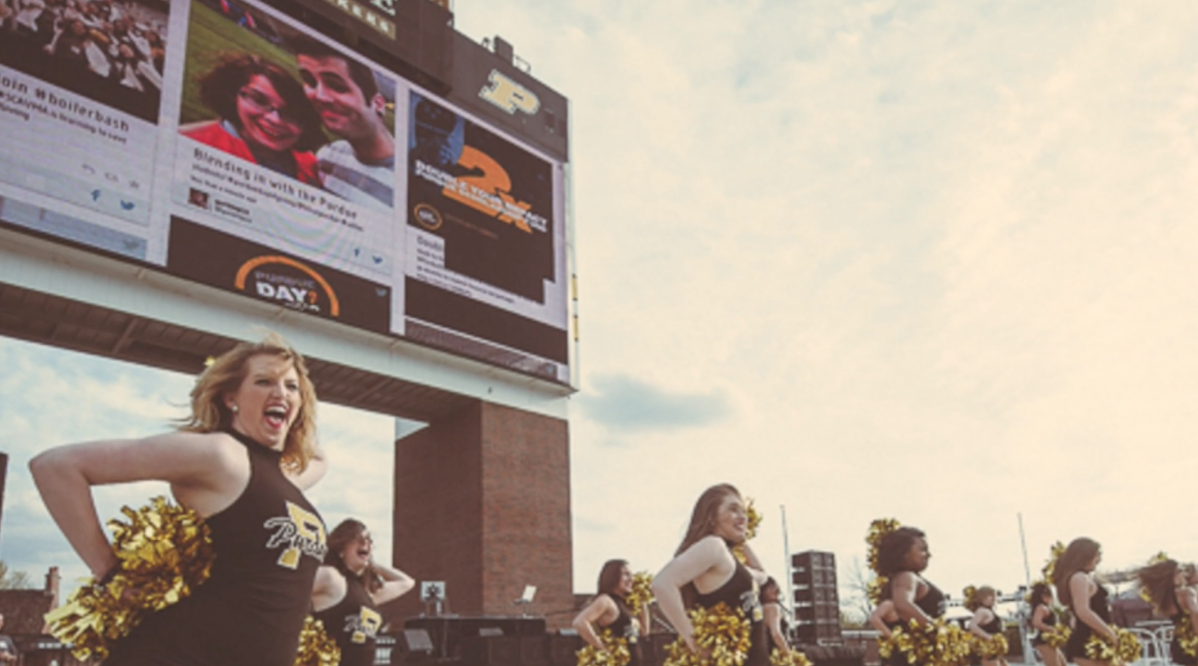 In a room at Purdue University, volunteers sip caffeinated drinks and blast off messages to students around campus.

Elsewhere, someone gets a sweet for Tweeting.

This is Purdue’s annual Day of Giving and, in 2017, the college undertook its fourth mega event in the hopes of beating donations from the previous year.

The frenzied 24-hour social media-driven donation drive takes over campus every year, with individual departments and schools running their own challenges and bonus schemes for keen donors.

Back in the caffeine-pumped room, a new Tweet pops up every minute.

In response, Gretchen Shelmon, the director of annual giving and stewardship operates a photo booth and sends personalized thank you videos to the authors of the Tweets. “I think it’s just an extra special touch,” she says. And there are plenty more special touches to go around.

In the College of Health and Human Sciences, there is a spread of colorful superhero-themed food and, in the veterinary department Bub, a characterful cat, thanks staff and puts out a plea for donations. 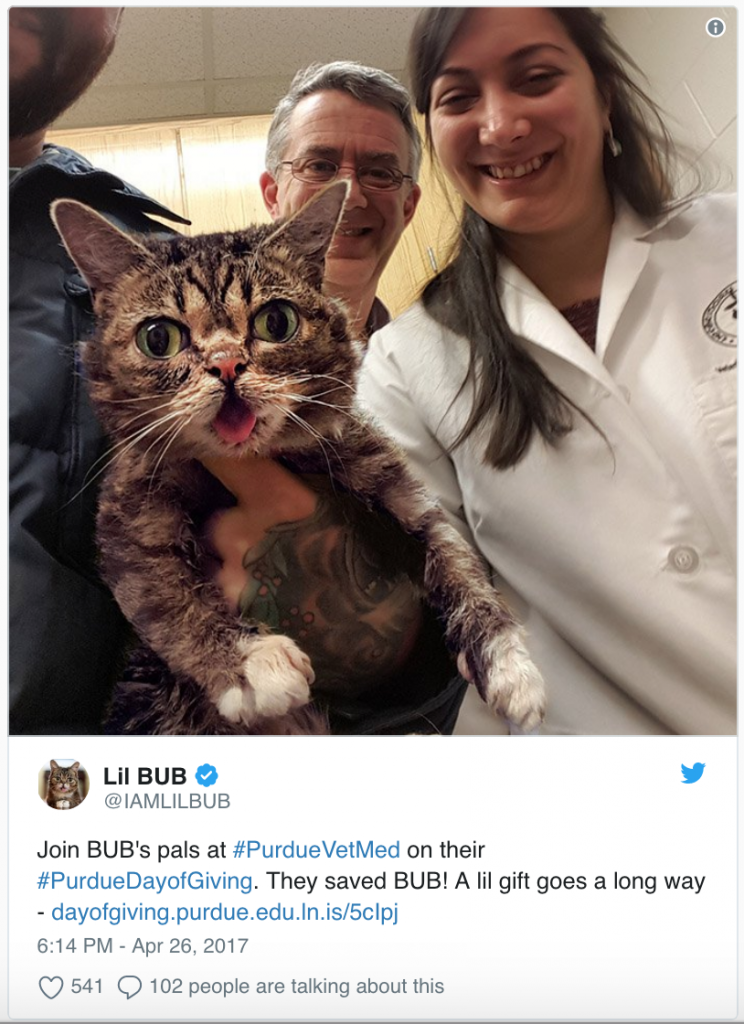 As a result, the 2017 Purdue Day of Giving was an absolute hit, with the event raising more than $20 million in donations by 5pm – exceeding the previous year’s number with seven hours still to go.

And the team that runs the event say social media and the community aspect is what makes it so successful.

Purdue’s two key goals for its annual Day of Giving event is to build a community and encourage donations.

Before the Day of Giving became a stalwart part of university life, the marketing team used a three-pronged approach to their strategies using:

When it came to smashing goals for the Day of Giving and adding in a twist that generated a buzz around the event, they knew they need to bring in social media. But, instead of swapping out the other tactics, they integrated social with mobile, web, and email.

User generated content seemed like the perfect way to combine the power of social media and encourage participation.

On top of that, brand engagement increase by an average of 28% when a combination of user generated content and promotional content are used for promotion – something that Purdue wanted to tap into.

While UGC was thoroughly leveraged throughout the event (which we’ll dig into more in a minute), let’s take a look at how Purdue also utilized it in the lead up to the Day of Giving and in the heady aftermath.

1. A Video One Month Before

A video introducing the Day of Giving was sent out one month before the 2017 event with UGC clips put together from the previous year. The aim of this video was to show current students how they could get involved and what they could expect from the day. 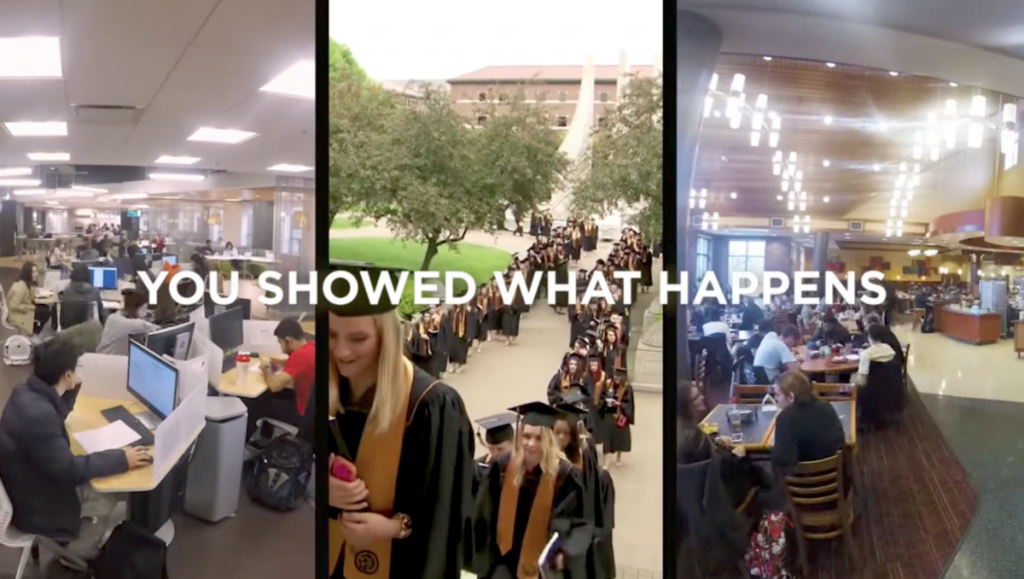 2. An Email One Day Before

At the end of the email, recipients were diverted to a specially dedicated page on the Purdue website where they could scroll through content that was being uploaded under the designated hashtags. 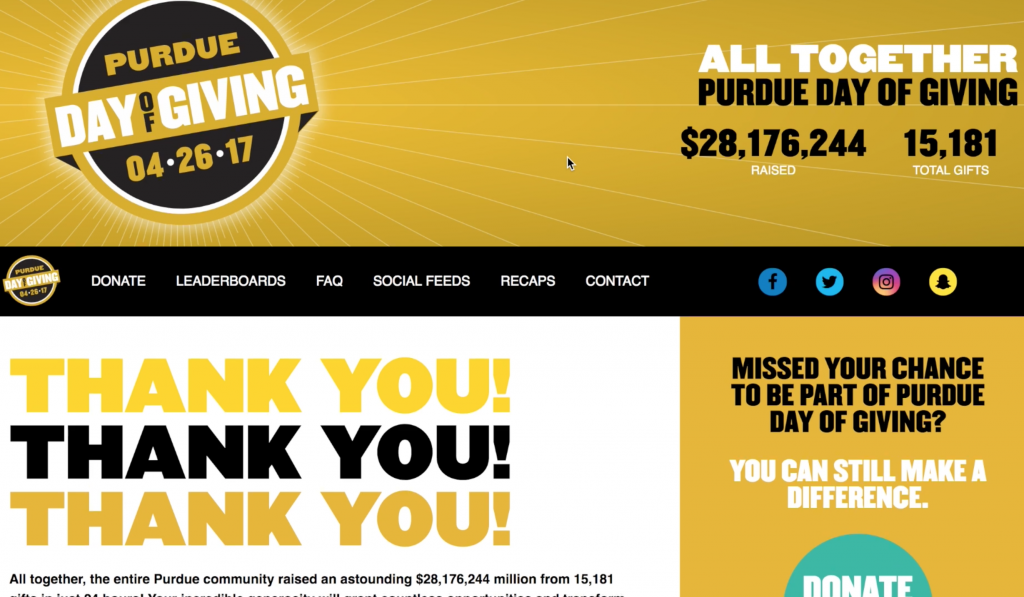 3. A Thank You Video After the Event

Every fundraiser knows that the money doesn’t stop rolling in when the event shuts down. And, while Purdue were focusing their attention on getting donations in a space of 24-hours, they were still anticipating a high number of donors to come forward afterwards.

Because they had created a thank you video that harnessed much of the UGC that had been created throughout the day. This video garnered a large amount of shares because students saw themselves in the video and automatically wanted to share it far and wide.

How Purdue Used UGC During the Day of Giving 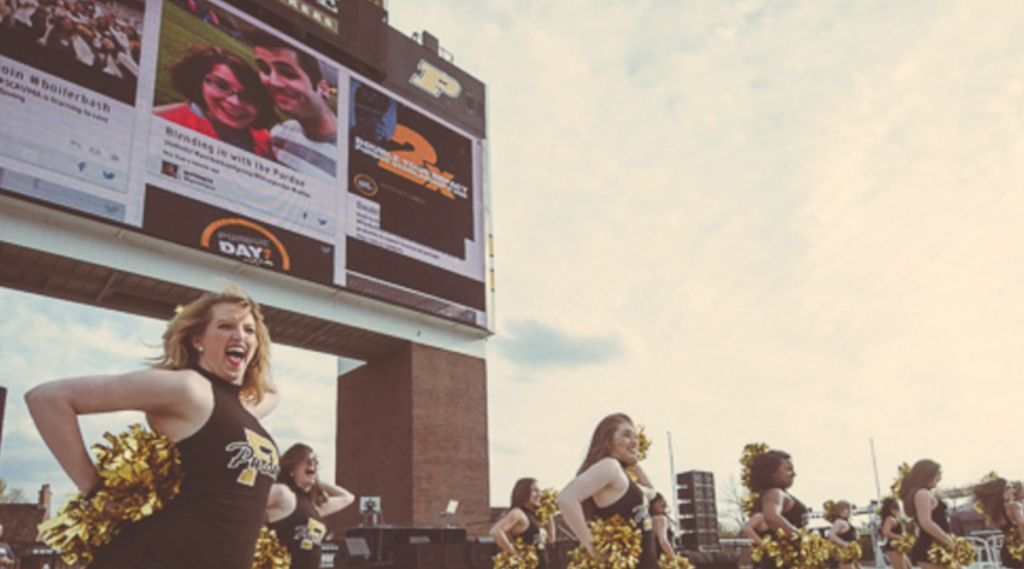 During the day itself, Purdue implemented a TINT feed onto a dedicated page on their site.

For them, it wasn’t just about bringing in the dollars, but also about building and nurturing a community, so by bringing all social media shoutouts and engagement together in one place, they created a kind of virtual community hub. 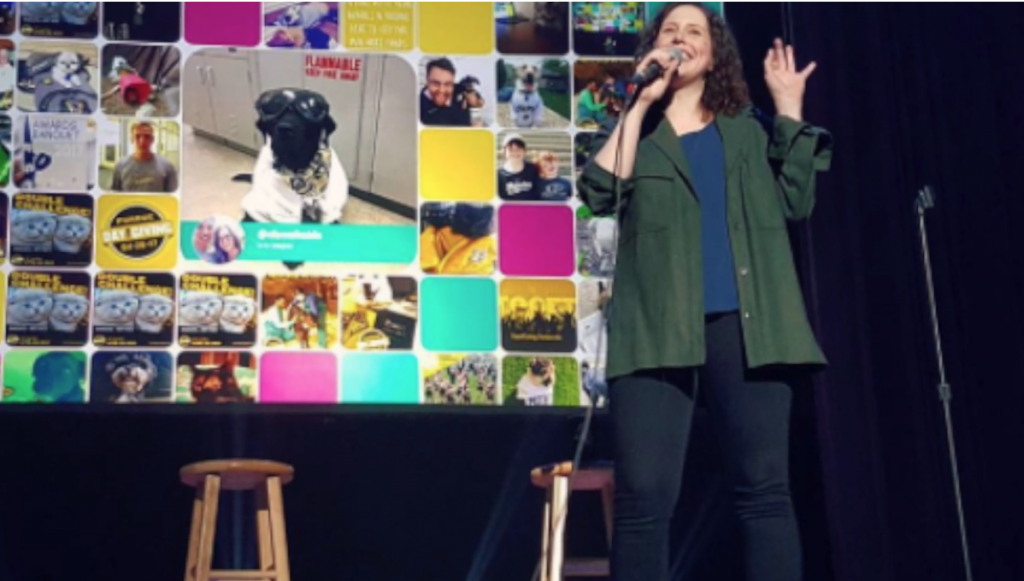 Elsewhere around campus, the different schools and departments integrated TINT feeds at events and on digital signage. For example, at a comedy show, there was a TINT feed displayed at the back of the stage so attendees could see comments and social media updates coming in in real time.

Throughout the day, those who wanted to volunteer at the event could help moderate the social feeds from the TINT dashboard and send out thank you notes to donors.

The Results of Purdue’s Day of Giving 2017

So did the university hit its carefully laid out targets?

Oh yes it did, and then some.

To begin with, Kate Jolly, the Director of Digital Fundraising at Purdue, and Amber Turner, the Senior Director for Annual Giving and Stewardship, reached out to TINT because they needed a tool that they could quickly and painlessly moderate social media updates from. 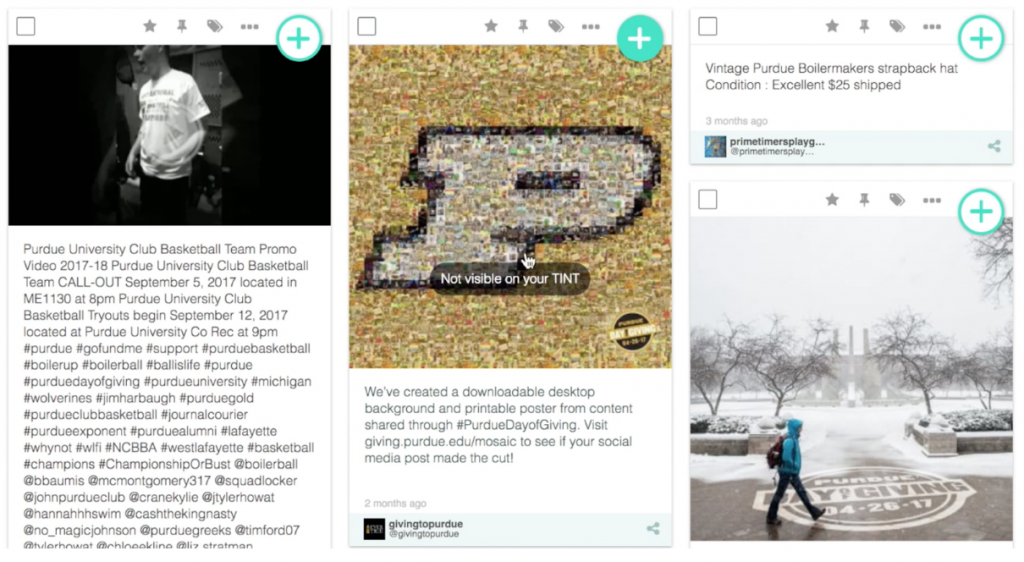 In the first year of running Purdue, the team spent way too long moderating Tweets, Facebook updates, and Instagram posts. The feeds were all held in separate places, making it a time-consuming process to have to go through every hour.

TINT, on the other hand, let them facilitate everything in one spot.

2. They Could Isolate Channels

The event was run across various different social media channels, with different departments choosing to run challenges and mini-events on different platforms.

For those monitoring the separate events – like the teams volunteering in each department – being able to isolate different channels was a huge help. For example, as well as bringing together all social feeds in one place, TINT can isolate separate channels for closer monitoring.

3. A Branded Strategy Across Campus 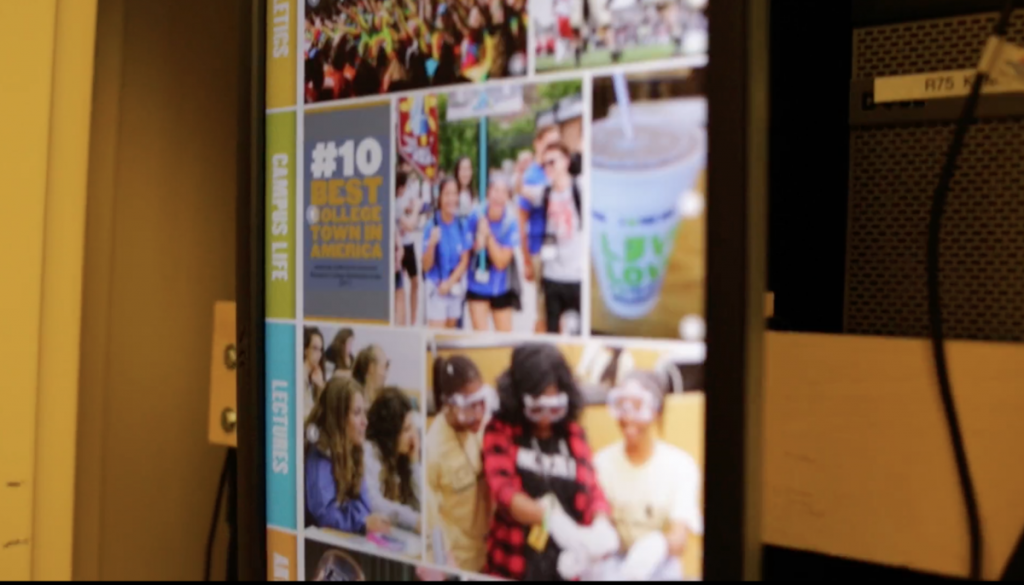 Purdue have taken TINT further than just their one-day fundraising campaign, too.

They’ve also integrated it throughout campus on digital signage in different departments giving the whole university a unified look when it comes to social media.

Sure, the content and hashtags might be different in different departments, but the integrated TINT feed and surrounding branding gives it a sleek look.

And, as a little bonus outcome, the marketing and fundraising team noticed that departments have started to use designated hashtags relating to the Day of Giving and other campus-wide events.

This gives campaigns an increase in reach and spreads the message far and wide, showing the true power of UGC and engaging social content.

UGC Was Perfect for Purdue’s Day of Giving

Having run for four years now, the Purdue Day of Giving team knew that a large portion of the buzz around the event was organic and had been built upon in previous years, but they noticed a huge leap in engagement and donations when they started to heavily implement UGC and a TINT feed. 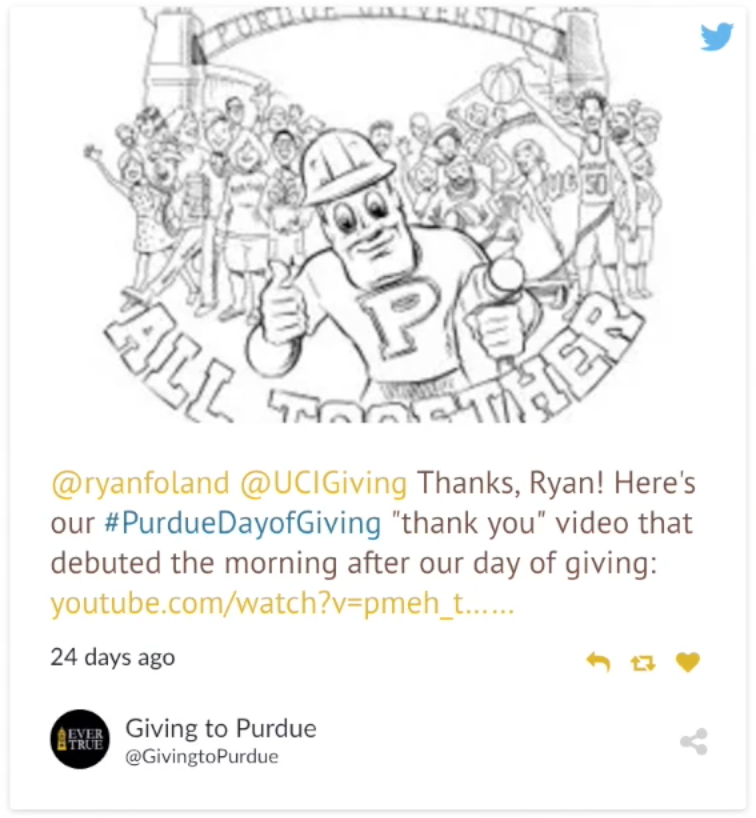 The social nature of content created by their peers meant other students were eager to get involved, and sharing hashtags spread the content far and wide so no crevice of the university was left untouched.

And, thanks to TINT’s easy-to-use interface and its ability to easily monitor and isolate social commentary, it was an absolute breeze for the team to curate a feed that was both engaging and persuasive.

Purdue really used UGC in every capacity, right from the video and email content created in the lead up to the event to the on-site page dedicated to the Day of Giving hashtag that was run through TINT. As a result, the campus saw a 190% increase in social impressions and raised almost $10 million more than the previous year.

The Day of Giving is now a sacred annual event at Purdue, with students eagerly anticipating next year’s event and the challenges, competitions, and online fun that comes with it.

Ready to leverage these marketing tactics for your institution? Speak to an expert at TINT for a free a Strategy Session!