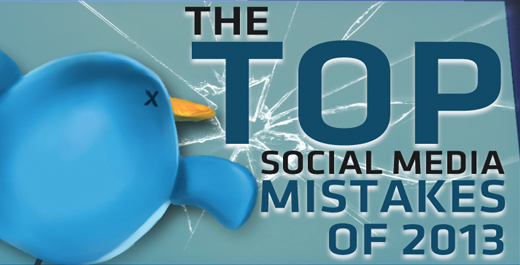 This is a guest blog post by Stacey Waxman, a marketing student interested in blogging about all social media related topics.

Every year – for better or for worse – social media grows in its importance to us. And not just for personal communication; today, social media plays a role in the way businesses communicate with consumers.

They say a lesson lived is a lesson learned. And in 2013, the corporate world has lived through quite a few harsh lessons on the social web. From the JP Morgan mess to the Home Depot debacle, we’ve watched huge corporations damage their own reputations thanks to careless errors and lack of due diligence.

Tomorrow’s Q&A is cancelled. Bad Idea. Back to the drawing board.

We have zero tolerance for anything so stupid and offensive. Deeply sorry. We terminated agency and individual who posted it. — The Home Depot (@HomeDepot) November 7, 2013

The mark of a great businessperson is that he or she learns from failure – not just personal failure, but the failure of others, as well. Let’s take a deeper look into noisiest social media fails of 2013 and find a teachable takeaway from each:

Last February, the fast food giant got flame-broiled when Anonymous hacked its twitter account. Not only did Anonymous change the company’s avatar and title to look like McDonald’s, they also managed to fire off a series of offensive tweets throughout the process.

The lesson here is clear as day: secure your account. Small or large, businesses need to protect their accounts. It comes down to the easy stuff: toggle your privacy settings, and use an extremely secure password that can’t be guessed by outsiders. More than 80 percent of web crimes stem from social media, and many of them could be prevented just by using a less predictable password.

In September, Kenneth Cole, the fashion designer and name behind the lucrative fashion label, carelessly tweeted an insensitive remark in reference to the ongoing Syrian conflict. What’s worse: his tweet was not only thoughtless, but also a shameless plug for his product line.

“Boots on the ground” or not, let’s not forget about sandals, pumps and loafers. #Footwear

Using controversial current events to peddle your product is never, ever a good idea. The lesson here? Be considerate. Social media revolves around an axis of quick-hit entertainment and short-lived trends, but that’s not an excuse to be obnoxious. You might get away with it on your personal account (not that you’ve got a free pass there, either), but you definitely won’t get away with it on a business account.

Early in 2013, the British retailer HMV fell on hard times and mass layoffs ensued. Unfortunately, when the execution began, senior management wasn’t aware that many of the employees they were displacing also had access to the company Twitter account. What happened next was unforgettable, as the formerly employed account holders sent out aof tweets chiding HMV’s policies and conduct.

Lastly, ladies and gentlemen, know who’s running the show. Layoffs are unfortunate fact of business development, but there’s no reason they have to turn into a smoldering PR disaster. Be good to your employees, treat everyone well and protect yourself and your business.

In recap of the takeaways from these fails,

2) Be considerate and don’t use controversial current events as a way to market your product obnoxiously.

3) Know who has control over your social media accounts and be responsible with it.

What other social media fails did you see  in 2013? Was there one that stood out from the rest? What other lessons did you extract from those fails? Let us know in the comments below!