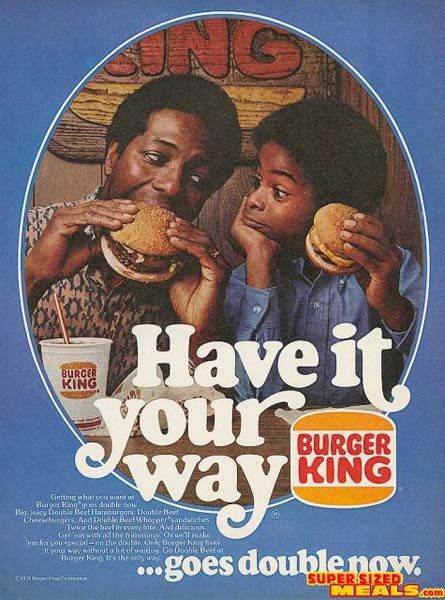 The 70s heralded a new era for the advertising world.

We’ve seen it portrayed in TV series like Mad Men, where it’s all sharp suits and martinis in swanky bars. But the changes that happened in the ad world in the 70s go much deeper than simple aesthetics.

The advent of the World Wide Web in 1969 promised more opportunities than the regular print ads in newspapers and magazines. Little did we know back then that it would change the landscape of advertising forever.

New reports show that half of all global advertising spend is set to be spent online by 2020. In light of this, we look back at how things have changed over the past fifty years.

It’s easy to assume that the internet was the changing force needed to shake up the advertising world in the 70s, but it was a more intangible shift that made it one of the most memorable decades for the industry.

More houses than ever had a TV with more than one channel, which gave consumers more choice than they’d ever had before. As a result, brands were having to shift the way they advertised their products to align with a more customer-centric narrative.

And, despite the economic pressures and political unrest of the 70s, total ad expenditures shot through the roof. But, rather than pushing money into newspapers and magazines (where ad spend peaked at 73% in 1974), more brands began to turn to TV advertisements.

As the prevalence of TV spread, viewing became a core experience in American culture, with the vast majority of households having their own TV.

In fact, in 1976, more than 69 million US homes had at least one TV set and watched TV for more than six hours a day.

The rise in the number of people who could view TV ads combined with the release of new TV channels meant that brands were forced to think differently about the positioning of their ads. This was perhaps the first inkling of the consumer-centric future we are now well-acquainted with.

The Growth of Computer Technology and a Consumer-Centric Future

Technology continued to advance throughout the decade, with a heavy emphasis starting to emerge on empirical advertising and fact-based marketing.

Thanks to more media choice, consumers quickly became the drivers of their own advertising experiences. If they didn’t want to see the ads on one TV channel, they could switch over to another.

Before this, consumers were used to seeing product-centered advertising.

Ads before the 70s and during the first couple of years of the decade were very product-focused.

However, in a bid to fight for the attention of consumers, brands realized they needed to move away from this format and dig deeper into the narrative behind why people should buy their products.

This created a lot of “comparison” ads, which quickly became a standard technique in American advertising by the end of the 70s.

For example, Burger King and McDonalds regularly mentioned their competition (sometimes indirectly), and Coca Cola even created their entire “It’s the Real Thing” campaign to go head-to-head with Pepsi. The aim was to promote Coca Cola as the real thing, and Pepsi as a substandard version.

Of course, this new comparison narrative opened up a can of worms, which regulatory organizations like the FTC tackled head on.

The new struggle to position themselves amongst the competition meant brands faced stricter rules and regulations. At first, we saw brands trying to get away with badmouthing their competition or even making up false claims to make their products sound better.

In one instance, the FTC ordered Warner-Lambert to correct their claim that Listerine prevents colds and sore throats.

These new regulations that demanded the truth helped consumers begin to see brands as more trustworthy. It also meant consumers in general became less skeptical, which marked a turning point in the advertising world.

How This Paved the Way For the Future of Advertising

In comparison, this plethora of new advertising methods was a far cry from the humble advertising options in the 70s. And, as a result, there are even more opportunities to reach your audience.

We’re a long way from the 70s now, but there are a few key concepts that emerged in the advertising world during that decade that we still have now.

For example, the consumer-centric angle of ads has remained prominent, and the need for brands to position their products in relation to their competitors is still much needed – particularly when there are so many more ad options than in the 70s.

Now, more than ever, brands are required to actively listen to their customers and respond to their needs with well thought-out and well-positioned ads if they want to gain a competitive edge.

We can expect this to continue well into 2020 and beyond.

This, along with the fact that we have far more information and data than we did in the 70s, as well as a whole new slew of tools, technologies, and platforms to utilize means the next decade could be just as pivotal as the 70s in the world of advertising.

Over the past few years, we’ve seen an emphasis on personalization. It’s no longer enough for brands to customer centric ads and hope that enough people see them. Instead, it’s about crafting laser-focused ads from consumer data and putting them on the right platforms.

So what advertising trends can we expect to see next year?

The use of Instagram Stories has continued to rise since the feature was released in 2016. They provide a raw way for brands to create narratives and communicate with their customers in a place they are comfortable.

As well as more Stories in general, we can expect to see brands making use of the Stories ads feature, too. This allows them to laser-focus who they reach by using the platform’s incredibly deep targeting options.

Consumer experience is everything, and shoppable posts are providing a way for brands to give customers an enjoyable experience while increasing their sales.

Shoppable posts on social media are paving the way for a new consumer landscape, where people can buy products with a single click and without having to leave the comfort of their social feed.

Use TINT’s suite of social tools to turn your posts into shoppable experiences for users.

In 2020, it’s thought that 50% of all searches across the internet will be carried out by voice.

Again, this trend taps into the need for a seamless customer experience. Consumers today are constantly on-the-go, and searching by voice provides a way for them to instantly get the information they need.

In the 70s, TV ads were new and shiny. The technology was exciting and brands were took advantage. Today, we have a swathe of new, more advanced technologies that are helping advertisers create more personalized ads and better connect with consumers.

Along with predictive analytics, which uses consumer data to serve ads based on past behavior and purchases, these technologies will drive innovation forward. They have the power to transform advertising in 2020 by letting brands tailor ads to specific individuals.

We see fully personalized, authentic ads at some point in the not-too-distant future.

From the 70s Until Now

TV disrupted the status quo and saw advertisers steer away from traditional print ads. Ultimately, it changed the way brands interact with consumers; something that is still happening today.

The customer-centric approach to advertising was born in the 70s, but it remains one of the most prominent concepts going into 2020.

With the internet, and new social platforms online advertising spend is set to overtake offline in 2019.

2020 might be the most exciting year for advertising yet, with advanced technologies making strides towards complete personalization and laser-focused consumer-centricity. How will you take advantage of hyper-personalization in your advertising efforts?