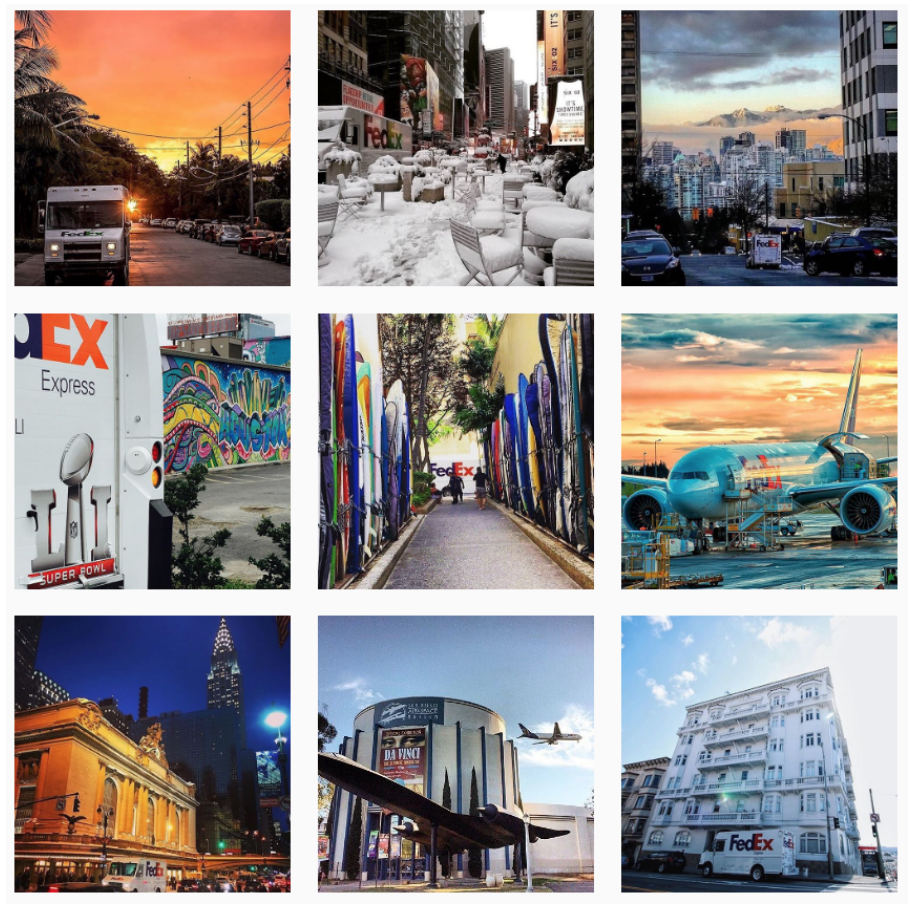 For starters, it results in 29% higher web conversions and is 20% more influential than any other type of media – particularly when it comes to persuading Millennial buyers.

Brands have realized for a long time that investing in UGC can result in higher engagement levels, increased brand loyalty, and more customers, which is why so many see it as a must-have marketing tactic.

There are many brands that are doing great stuff with content created by their customers, and we’ve pulled together a selection of the best.

The launch of the HERO7 Black was a big moment for GoPro, and they wanted to mark it in a memorable way. 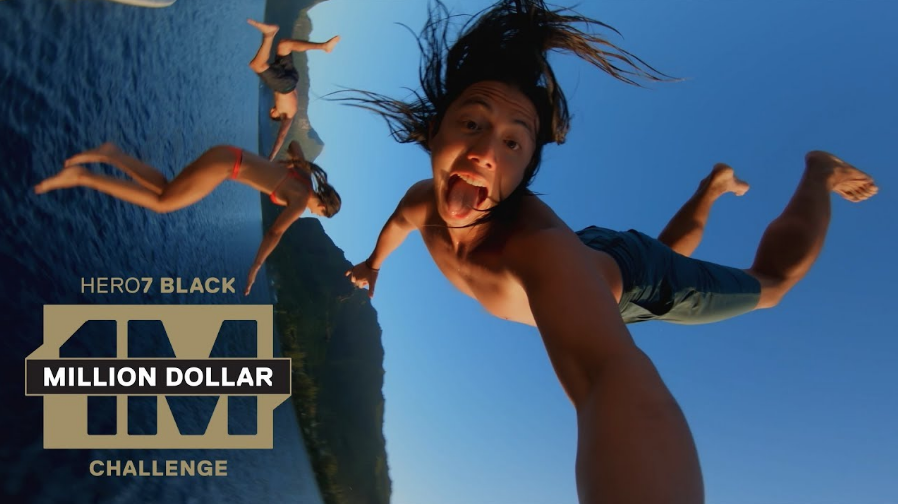 They challenged their loyal, adventurous community to create an epic highlight reel made from snippets of GoPro-shot video from around the world.

GoPro encouraged its customers to share their videos using the hashtag #MillionDollarChallenge and selected the best to form a short video. The submissions that were included in the video each received a cut of $1 million – hence the campaign’s name.

It wasn’t just the visuals that were customer-shot, either.

GoPro incorporated music produced by a community member, which the brand claimed was the icing on the cake and fine-tuned the personal feel of the video.

Not only did the brand receive more than 25,000 submissions from every corner of the globe, the campaign also marked a turning point in the way GoPro markets itself.

“We are fundamentally thinking differently about how we shoot and produce content and build our product stories,” says GoPro founder and CEO, Nick Woodman.

Just a decade ago, hotel marketers only had to worry about advertising in print magazines, creating website assets, and having a couple of billboard ads sprinkled around.

There is social media content to create, mobile sites to build, high-converting landing pages to design, email marketing campaigns to run, and everything in between – all for the same budget as back in the day.

Loews Hotel found a solution that filled all their marketing channels with great, regular content and kept customers engaged throughout the buying cycle.

They share guest-generated content through their #TravelForReal campaign. Through this, they collect thousands of pieces of authentic, engaging content that they can then use and repurpose in magazines, on social media, on their website, and various other marketing channels. 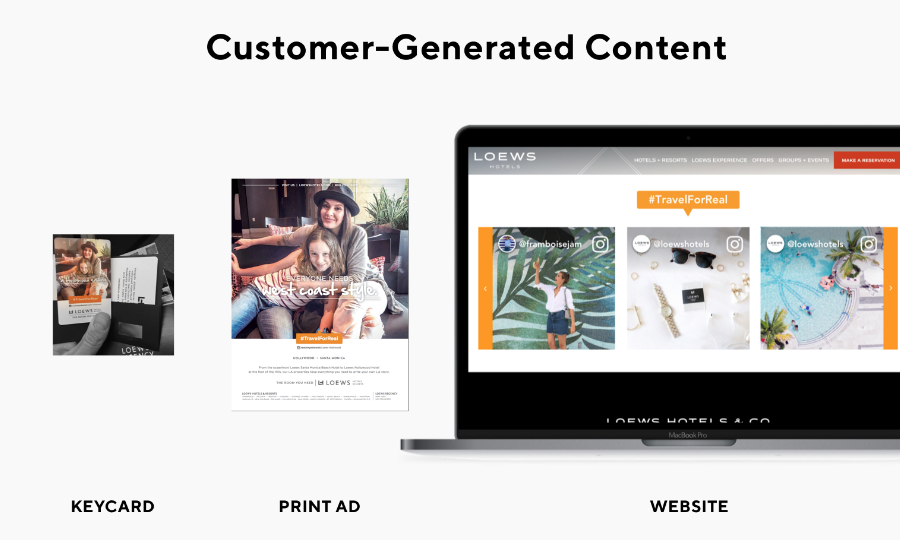 They use TINT to scale their campaign quickly, by gathering content shared on all platforms in one central dashboard.

The campaign has resulted in a 62% increase in social engagement and a 4x increase in revenue from on-site bookings.

Google isn’t known for its phones, so the brand racked their brains to come up with a way to promote their latest handheld device to a consumer base that predominantly associated them with search. 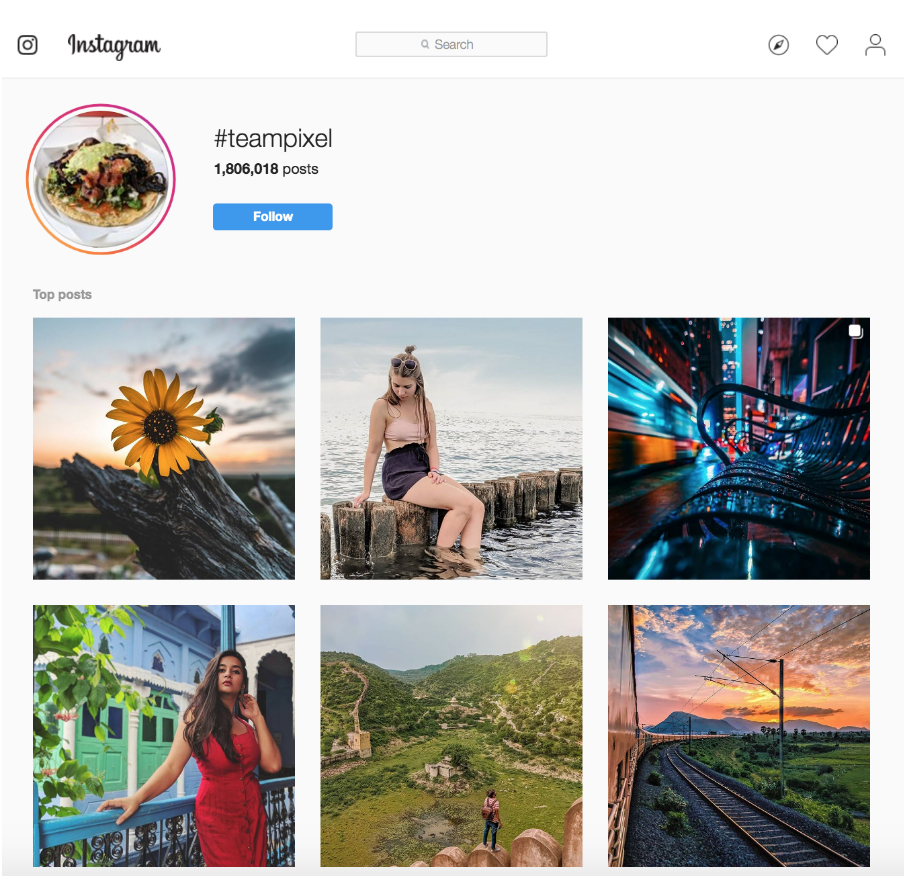 “We knew that to turn consumers into true believers, we had to demonstrate the phone’s unparalleled camera in a way that felt authentic to our audience’s social behavior,” the brand said.

But they didn’t want to do it through branded content. Instead, they pulled together and nurtured a group of micro-influencers who were already loyal users of the phone (and who absolutely loved it).

These advocates posted more than 10,000 times from their Pixel over an eight month period, using the branded #TeamPixel hashtag to raise awareness. 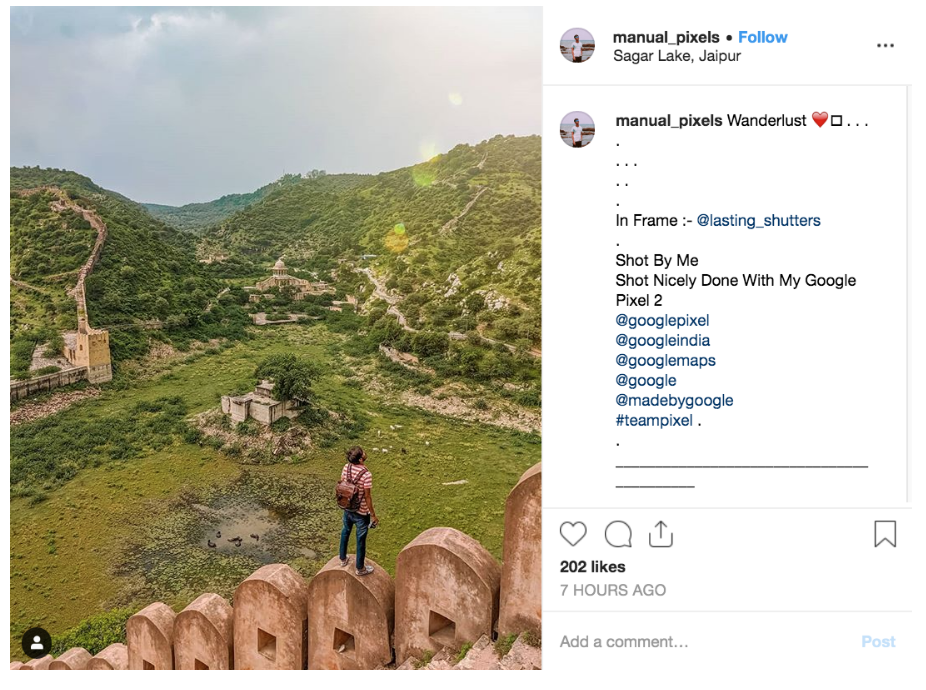 Airbnb are well-known for their authentic marketing tactics, and they’ve managed to find the sweet spot with UGC.

Their main Instagram profile isn’t a place for branded snaps.

Instead, it acts as a portfolio of guest photos that showcase a range of weird and wonderful accommodation all around the world. 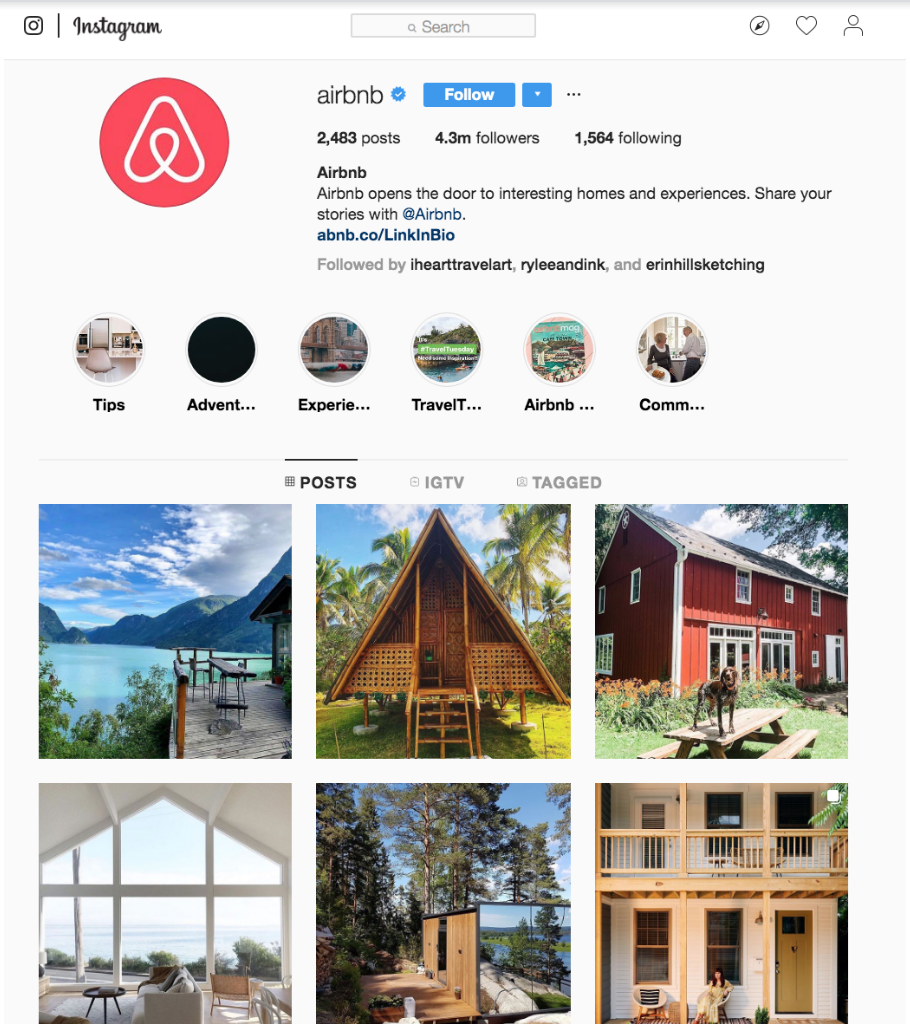 Guests are encouraged to share snaps of their stay under the #Airbnb hashtag, with the most compelling images regrammed to the brand’s main account and its 4.3 million followers.

The result is an online, social-friendly brochure of inspiration for potential customers looking for a quirky place to stay.

While Airbnb showcases amazing imagery of its locations all over the world (we’re talking white-sand beaches, palm trees, and cosy log cabins), G Adventures decided to flip the script on Instagram travel shots and share the unfiltered side of things.

“At a time when images are often filtered online to present a particular image and social media delivers a glamorized version of real-life events, G Adventures wanted to share the reality of traveling,” the brand claimed.

Their goal was to reach female travelers between the ages of 18 and 30 through gritty, raw images that brought home the reality of traveling.

They did this by encouraging their community of adventurers to share their “real” experiences under the hashtag #AdventureUnfiltered to be in with a chance of winning a $12,000 trip of their choice.

This was the very first campaign from the brand that focused solely on brand awareness. 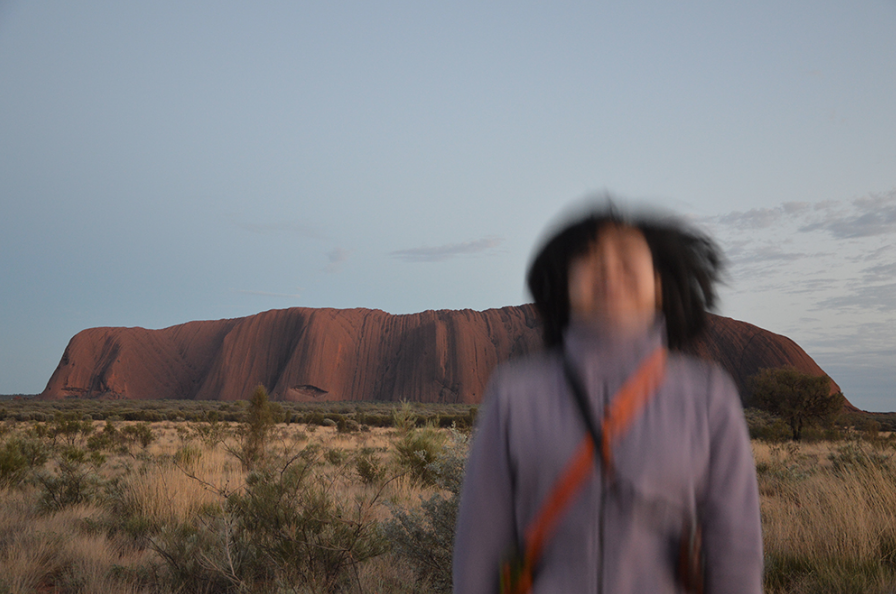 Entries were collected through Instagram and Twitter, but there was also a direct upload button on a dedicated landing page that showcased a gallery of all the submissions.

The results speak for themselves – there was a 32% increase in impressions and a 5.6% increase in engagement across the brand’s social channels.

In the lead up to the 2018 Global Climate Action Summit, the UN Foundation created their #EyeOnClimate campaign that invited Instagram users to document solutions to climate change from around the world. 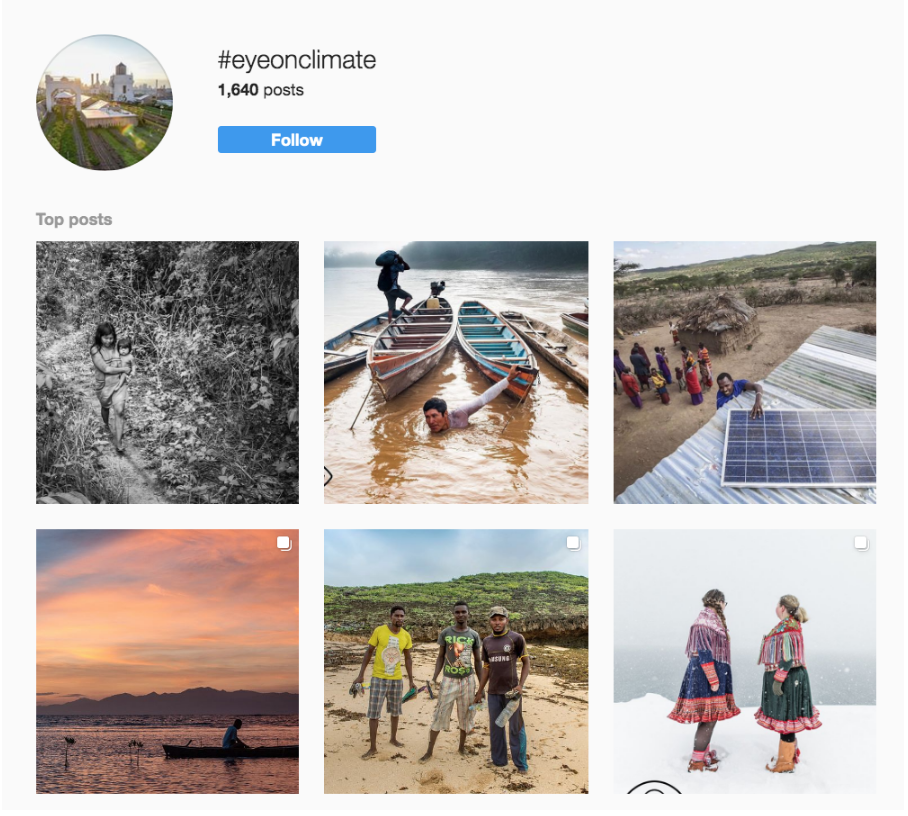 This was a follow on from the first leg of the campaign that focused on sharing the impact of climate change.

The UN Foundation identified Instagram as the place for environmentally-savvy individuals to share their stories of climate change and the solutions they were implementing to make a difference.

Though there was a challenging edge to the campaign (focusing on solutions is no easy feat), it smashed previous UN Foundation social media records and generated over 700 user-generated posts on Instagram alone. 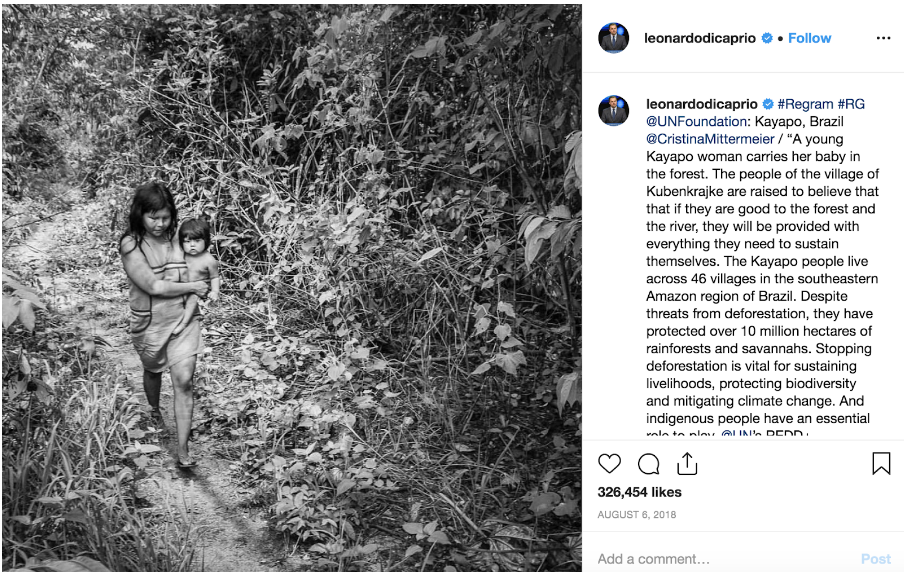 The hashtag was used in more than 2,500 posts (including snaps by the likes of Leonardo DiCaprio and prolific Nat Geo photographers) and reached almost four million people.

7. FedEx in the Wild

FedEx isn’t the kind of brand you associate with fun social media campaigns, but FedEx managed to turn that around with their award winning UGC FedEx in the Wild campaign.

“When we initially launched our Instagram presence, it failed,” the brand admitted. “We reused content found on our other social channels without a real strategy, which ultimately was not successful.”

They soon realized they needed to stop putting themselves at the center of their posts and instead shine the spotlight on their followers.

They did this by encouraging their customers and fans to share photos of FedEx vans out and about in all parts of the world.

In the first nine months of the campaign being live, FedEx’s Instagram follower count has increased by 404%.

They now have a highly engaged following that is loyal to the brand, and they’ve worked hard to continue to nurture their relationships with their audience.

It makes sense that Adobe has access to a ton of creative content – it is a creative platform after all.

They’ve really tapped into this with several UGC campaigns, including their #Adobe_Perspective hashtag that encourages artists and content creators to share how they use the software to do their everyday jobs. 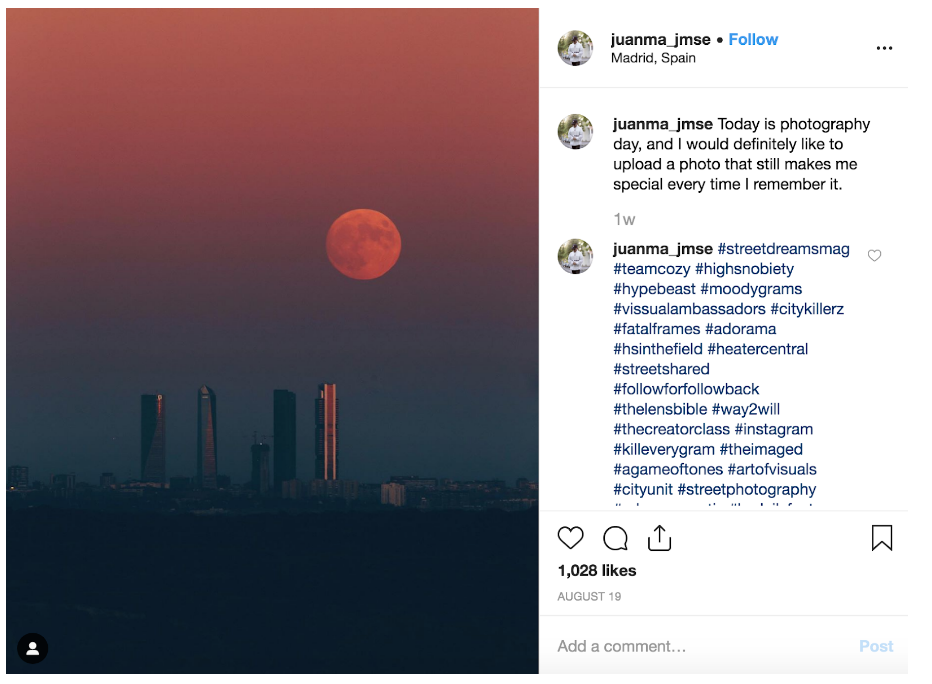 This helps future prospects see what the software is capable of doing while engaging its creative community.

On top of that, it runs the #Adobe_InColor campaign throughout Pride month. Again, this lets the brand show off the creative talent of its customers while inspiring future prospects to get involved.

Get Started with UGC

As more and more brands realize how successful UGC can be, we’ll start to see even more brands nailing these kinds of campaigns. Still need inspiration? Here are even more user generated content examples.

UGC is a vital part of content marketing, particularly if you want to increase engagement levels and build a loyal following (and, let’s face it, who doesn’t want that?).

The key is putting together a campaign that:

Once you can do this, you’ll start to see huge results like the brands we highlighted here. Expect a surge in engagement, increased brand loyalty, and a big improvement in ROI.

Ready to boost your authentic marketing? Request a demo—we love talking about this stuff.