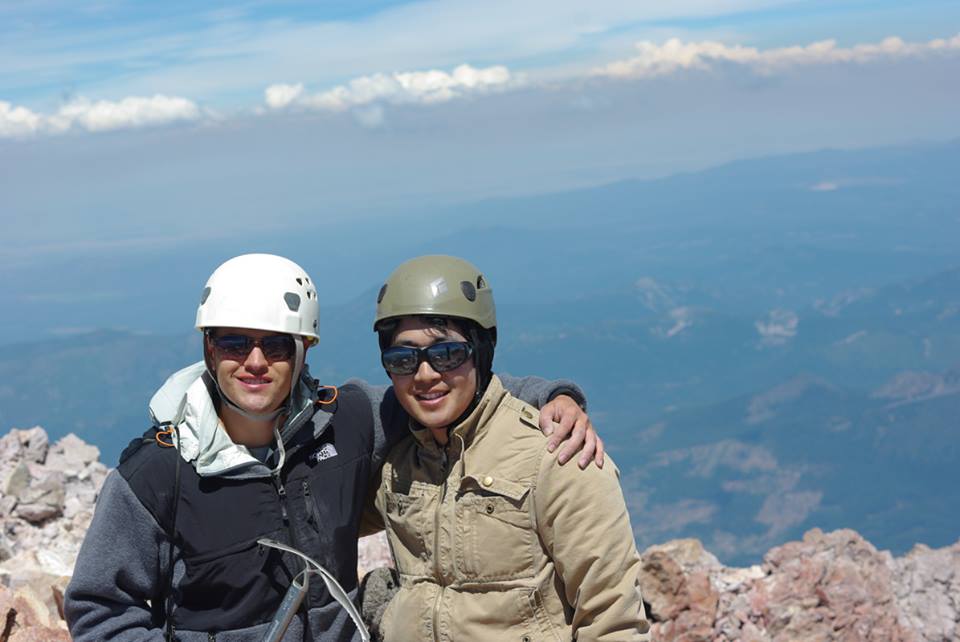 A few months ago, I completely changed my daily routine. I’m not a morning person, but at a friend’s urging I started getting up earlier to play tennis before work. I loved this new schedule – how energized it made me feel throughout the day- and I’ve stuck to it.

When my colleague Ryo suggested we start a self-improvement program at Tint, I embraced the idea. Right now, in its first month, our “program” is pretty much as simple as can be: at the beginning of the month, each team sets a personal improvement goal and records their progress in a shared spreadsheet. A $100 monthly stipend helps team members fund their endeavors. At the end of the month we meet as a team to discuss, support, and promote the benefits of our goals. As our CEO, Tim, is fond of saying: we’re running a marathon while building a company, not a sprint. My hope is that my colleagues and I will continue to find ways to make ourselves feel better, work better, and live better.

No matter what your idea of self-improvement is, we want to help each other accomplish it.  To me, it is getting better at tennis or doing something out of my comfort zone like climbing a 14 thousand foot volcano.  For my colleague, Quinn, it is “acquiring moves like Jagger.”  With some structure, a stipend and some peer pressure – I mean, support – we aim to make that happen.

We had over half the team participate this first month, so without further ado, in our own words, here is what we did this month:

Silky smooth does not describe me yet. In the past I have found four things when I dance:

1. I have the confidence,

2. I lack the ability to coordinate my upper and lower body

3. I dance with my tongue out

4. I sometimes have too much confidence and do weird things with my legs because I think it looks good.

One of my goals, and my goal for this month was to be more fluid and actually use moves that were socially acceptable. I started the month off strong by going to an Old School Hip Hop class at City Dance.  The class was a lot of fun, but I didn’t really learn too much about Hip Hop.  Also, I had absolutely no background in Hip Hop dance, so it probably would have been quite comical to watch me on the floor.  But who cares, because I was in the zone and not worrying what I looked like.  Since this class was more of a “Follow the Leader” class, and since I had no idea about the moves, I was pretty much doing improv the whole time.  After this class, I kept trying to go to a Hip Hop for Beginners Class so that I could learn the basics, but I always had conflicts.  Overall… Hip Hop abilities before the month = 0/10.  Hip Hop abilities after the month = 0.5/10.

Salsa is a different story.  I took a Salsa class at Cornell for a semester.  I had a really good partner so that was nice and I learned some basic Salsa.  The problem was that the class was so large that the instruction was limited and it was hard to build up a silky smooth repertoire.  For this month, I attended a MeetUp salsa class with 4 other strangers.  It was actually good because the class was small and I re-learned the moves I had forgotten from college.  After the class, we all went to a salsa club, ate salsa, and also danced some.  I then kept trying to learn with a webinar online, but eventually I kept putting it off and so that was the end of my salsa dancing for the month.  Overall…Salsa abilities before the month = 4/10.  Salsa abilities after the month = 5/10.  I also went to Vegas and partied it up in some clubs and danced my usual way with a little Salsa thrown in there.  I still have 4 classes left on my dance pass to City Dance, so I’ll be checking some of those classes out this month too!  I wish that I had stuck with the dance over the past month, but honestly it was hard with our team trip to New York and other priorities that I wanted to accomplish.

My nighttime routine for the past 12 years has always revolved around using the computer before going to bed. Whether it be playing a game, coding up something, or redditing, it usually ends up being the last thing I do before falling asleep. I had grown used to the bright light of the screen lulling me into a night of restless sleep. I’ve heard the rumors that reading before sleeping is all the rage. Such a simple task seemed like a daunting undertaking, but somehow I mustered up the courage and bought a kindle. I decided to try reading every night as the last thing I do before falling asleep.

The first night I started, I read for 3 hours before I finally slept at 3 am.  This was probably not the best idea, but I was hooked. The next week I read every night before dozing off and each morning I felt more rested.  I engrossed myself into the worlds created by the authors and let go of any and all stresses from the day. I woke up more energized and more focused for whatever the day threw at me.

While I didn’t technically complete my goal of reading every night, I have bought into the whole ‘reading for self-benefit’ mantra.  My nighttime routine is starting to be reforged, with reading taking the place of last minute computer time.  I expanded reading time to beyond night, taking any chance I can get to bust out my kindle and read a few more pages.

That was trippy. Spending 90 minutes enclosed in a salt water coffin isn’t a normal Tuesday morning activity for anyone. Standing outside of this “thing”, I couldn’t help but feel like this was some bogus new age medicine meant to trick yuppies out of a few hundred dollars; but, in I went. The first sensation was pain. I was immediately reminded of the cut I had on my arm. While the pain dulled, so did the idea of being trapped in here. Boredom and thoughts of regret filled my brain. Then I remembered what the guy at the front desk said “experiencing nothing is really something,” and slowly I began to relax. I moved my arms from the sides of my body and allowed them to float above my head, as if laying back on a comfy sofa. I thought I’d get sleepy but so many thoughts were running through my mind. On my way to this therapy session, I had been reading Stones into Schools, Greg Mortenson’s story of serving people in the most remote and desolate parts of the world by building schools for their daughters. I began thinking about SHE, Schools for Her Education, a non-profit I had conceptualized in college to support young girls in technology.

I eventually nodded off for what could’ve been a few seconds or 30 minutes, I’ll never know. When I woke up, I had a panic attack. I couldn’t breath and had to open the sarcophagus to let some fresh air in. I eventually went back in and finished the rest of the session – half terrified and half pissed that I was close to some sort of enlightenment and had chickened out. While I wouldn’t call it a success nor a failure, my experience with sensory deprivation has encouraged me to conduct more internal exploration into becoming the person I want to be.

It is very rare that I stop. My days usually begin with cold air, a brisk walk and a bunch of pixels arranged into something that resembles a plea for help or a mind stimulating problem. Walk, work, walk, work, walk, work … there is probably some fast talking and other acts in there too, but I never just stop. Even when I sleep, I grind my teeth, have crazy dreams and always imagine how I can do every day a little bit better than the last. Floating is stopping. Enveloped in body temperature water, no sounds, no sights and after 15 minutes of battling an initial sting and some salt in the eye, I literally floated into nothingness. For a good 45 minutes my mind slid into a state that I almost never feel where my brainwaves were stable and my thoughts just stopped. I stopped and it was great to balance my mind, body and “spirit.”

I planned on vectoring an illustration everyday, printing it out, and pasting it on the Tint lounge wall. I was hoping to improve my illustration skills, but I ultimately failed the challenge, because I underestimated the amount of time it would take to complete an illustration a day. It took me about 4-5 hours for the first one. I did, however create many graphic mockups for my personal projects throughout the month, but I was too lazy to print them out, and they were too large to fit on the small photo paper. Of course, illustrating/vectoring is something I know I will definitely work on, but I need to understand my own pace.

Although I don’t plan on climbing any other mountains in the near future, this was a great experience.  It was definitely one of the most challenging things I have done in my life, which is cool and rewarding in and of itself.  Climbing Mt. Shasta was both mentally and physically exhausting.  No one part of it was particularly challenging, but the sustained physical activity coupled with the intensity of the situation and the elevation for 18 straight hours was a huge challenge.  The most unique part of the experience for me was how on our own we were.  We drove an hour through barely marked dirt roads to the trailhead.  Then hiked 3 hours up to base camp.  And at the summit we were 11 hours from there at an elevation of 14,179 ft.  If something went wrong, we were not getting help anytime soon, and even minor things become a big deal up there.  There were no directional signs, first aid, bathrooms, food, or even water.  Beyond that, simply being on the isolated mountain was a very cool experience.  It is essentially untouched by humans, which was a stark contrast to most of my experiences in the outdoors at touristy public parks.  Additionally, I learned a lot about mountaineering and it is a cool feeling knowing I climbed a 14 thousand foot mountain with my bare hands.  Special shout out to my climbing buddies Bhaskar and Ryo who I wouldn’t have made it to the summit without!

I wrote about my experience climbing Mt.Shasta in a letter to my girlfriend, Monica. It was a powerful and challenging experience, and I’m so glad I did it.

And so, Team Tint has successfully completed its first month of our yet to be cleverly named self-improvement program (I may need help on this one, so feel free to throw some ideas my way in the comments).  We’re still tinkering with the specifics and will be experimenting with different ideas to improve the program so stay tuned! Expect a monthly post on all of the cool stuff us Tinters are doing outside of work. Suggestions welcome.

December 23, 2016
By clicking “Allow All”, you agree to the storing of cookies on your device to enhance site navigation, analyze site usage, and assist in our marketing efforts. Allow AllNo